We have a mock dresser in our kitchen – bought from Wickes.  Basically it’s two tall wall cupboards at either end of a set of 4 with 2 small ones in between.  We had it put in August 2001 when we had our kitchen installed.

The original plan was to fit it out with glass shelves eventually, to replace the MDF ones, after we had come back from our holiday to Florida and the Bahamas in September.  As you will remember that was the time of 9/11 and the destruction of the twin towers.

At the time we were on the all-inclusive part of our holiday in the Bahamas due to go back to Florida on 13th September.  Needless to say that never happened and we eventually flew back direct to UK from the Bahamas 3 days later than we should have.

So – somehow the plans for the glass shelves – well got shelved!  Other things took over and it is only now 15 years later that I am getting round to it.  In the meantime I had used two of the MDF shelves to create some bookshelves at the side of the Dresser.

The tall cupboards should have 3 shelves each and the small ones 2 each (they only had 2 and 1 respectively) – but what really bugged me about them was that the shelves did not have any fixing points to allow them to lie hidden behind the bars on the doors.  They were visible at various points through the windows.  Note glass shelves are already fitted in the left hand cupboard – I forgot to take a photo before I started!

You would think it would be easy to find glass shelves to fit – but it wasn’t.  I checked out having them made to measure and they were at least £26 each – and we needed 10.  Way over our budget.  I tried Wickes but their current units are slightly deeper than ours and so the glass shelves are too deep to fit.

I eventually found some at B&Q for £10 each – with one snag.  Whilst they fitted ok on the normal shelf supports, if they moved all the way right or all the way left they just missed reaching the other side, and so would collapse.

So what to do.  I had a flash of inspiration as I looked at the fittings we’ve collected.  Cam bolts!  A long longer than the shelf supports.  Here’s a comparison.

However to stop the shelves sliding on the metal we needed something covering the metal.  Another flash of inspiration – clear plastic tubing!

I investigated Cam bolts at B&Q – £6 for 8.  At that price it would cost a silly amount for the 40 I needed to fit all the shelves.  Then I found some at Screwfix for £3.99 for 50.  A no brainer, and I ordered the tubing off Ebay for a couple of pounds.  I wasn’t sure I had ordered the correct inside diameter at 6mm but it was thank goodness.  Now to fit it over the cams.  I kept the cams cold, and warmed the tubing – and then slid the tubing over each cam cutting it to length as I went along.  This sounds easier than it was.  I had to  hold the end of the cam in some pliers to stop it heating up, and really push the tubing on – so much so that I got blisters on both of my thumbs! – before cutting off and pushing it a bit further on.

Eventually I had all the cams ready – now to where I needed the holes, and to drill them.  This is where my quilting rulers came in handy.  I was able to use my 14 in by 4 in (my very favourite ruler) and my 6 1/2 in square ruler to mark up where I wanted the holes – in line with the bars on the doors.  Then drill bits – what size.  Initially I drilled 4.5 which were a little too small, so switched to my 5mm bit to make those holes bigger – but the 5mm just wasn’t sharp enough to get through the covering on the MDF cupboard sides – so I ended up first drilling with the 4.5mm and them widening and deepening with the 5mm and then screwing the cams in.

One good thing with cams, if you have ever used them, is that they screw in brilliantly and virtually level – exactly what I needed for the shelves.  And here is the first cupboard with first just the cams and then the shelves included.

Over the next few days I progressed through the other cupboards and now I’ve eventually ended up with what was intended all those years ago – and more storage, always handy! Another benefit is that the cupboard lighting I’ve installed now shines through the shelves, as originally planned, rather than just on the top shelf.

You can see the difference here, before, during the day and at night with only half of the shelves done in the cupboards on the left –

and here after they have all been done.  Those observant amongst you will have spotted the extra lights at either end and that I’ve moved everything around! 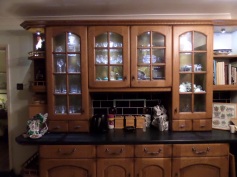 The next thing was to sort the under cupboard lighting which was something else on my list for this year! But that’s for another post!

1 thought on “The Dresser”